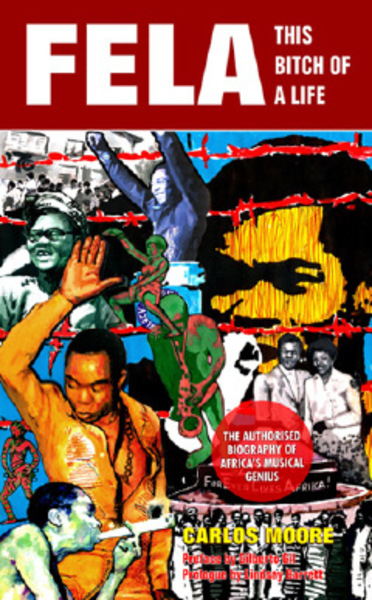 Perhaps Carlos Moore wrote Fela Anikulap-Kuti’s biography in the first person to show how close they were; whatever the reason, that decision made the book. “Fela: This Bitch of a Life” couldn’t have been written any other way.

Fela’s narrative started with himself, with the claim that he is an Abiku, a twice born, having come before as his elder brother who was named Hildegart, and who died in infancy. Then the narrative moved, naturally, to encompass the whole: his grandfather, his father, his siblings, his mother and the world he knew as a child. His feeling for his father where clear; he admired the man a lot, yet it was clear he couldn’t wait to leave home, to be free of the staunch discipline enforced with the cane. The cane appeared to have been prominent in Fela’s youth—3000 strokes, he counted, somehow, before he got too big for the cane.

He says of his father:

“if you offended him while he was beating you, you would get beaten with three times as much force. I always wondered how a man who looked so jovial could be so fucking cold when he would flog you.” His mother didn’t spare the rod either: “My mother wasn’t any better than my father. Ummmmmmm!!! She beat the hell outta me, man. My mother was the most wicked mother ever seen in life when it came to beating. Oh-la-la! Every time, I would say, ‘this is the end of me.’ Oh, how she would beat me!”

This imposed discipline was the reason Fela gave for not using the cane on his own kids, but that rule appeared not to have extended to his wives, who he did punish, not with canes, but with the flat of his, hand applied with force to their back or face. Perhaps this is a reflection of his view of women.

“What I understand about women? First that they like to be slept with. They like you to make them do things to you…they like to test you, so that they can get away with something. If you let them get away with it once, you’re in trouble. But if you stop them from getting away with it, then they’ll stop,” he says.

Fela clearly did not understand women’s lib and advocated for the submissive African woman above all else; strangely though, he appears to hold very strong, even if conflicting views, about the place of women in the world, which doesn’t quite add up when placed side by side with his reverence for his mother and his adoration of Sandra. His abhorrence for homosexuality and belief that it is a western thing is as clear as is his belief that he was called to fight for the voiceless and the downtrodden.

His women appear to understand him very well and are happy with his idiosyncrasies. They all believe he is some kind of a stud, a man very knowledgeable about woman sexuality—in other words, Fela, according to his women, was a very good lay, the best. And from some of these women, came the picture of the horror that is the military invasion of Kalakuta Republic, Fela’s home. Their tales of brutality at the hand of elements from the Nigerian Army is a low point, not just in the book, but also in Nigerian history, a history that begs for revalidation and redress.

While Fela’s humanity became more obvious page after page, the sense of the enigma remained. Even when he’s talking about mundane things such as being punished by his parents or giving in to the whim of his teenage emotions, the sense that this is no ordinary being is all pervasive. It is not that Fela’s narrative tries to assign greatness or otherworldliness to anything or anyone—he did with his mother, but that came much later, towards the end of the book. If anything, his treatment of the historically attested greatness of the Kuti clan was off hand, light hearted, as if it was of no consequence, to him at least.

“My mother succeeded in dethroning this pseudo-king, the Alake. How did she do it? It was ingenious. She got all the women together and told them: ‘Now, we are going to take over the Alake’s house.”

Even his description of a visit with his mother to then Ghanaian president, Kwame Nkrumah, was treated the same way. Though he did say the president was his mother’s friend, he tossed off the story like one of those everyday tales. I don’t think meeting Africa’s most popular leader at that time is an everyday occurrence; neither is forcing a traditional ruler from his throne. Truth is the Kuti’s were an integral part of Nigerian history, but this wasn’t a big deal to him: a humility that he obviously passed on to his children.

His music was not ignored. The narrative voice took us on a journey of the man, and the music is what made the man. We see the early days, from Abeokuta to Lagos, from Lagos to London, back to Lagos and onward to America. We see not the creative process as such, and as some would have loved to see, but the reason behind the songs.

Understandably, Fela’s narrative voice did not dwell much on the early songs, the pre-Africanist days; it was clear he would rather forget those days and the pain that envelopes them. The songs composed by Fela the PAN-Africanist are a different matter. According to him, “Creativity, not destruction, should be the yardstick of greatness. If you cannot create anything that will make your own life, or that of your fellow human, happier, then get out of the way. Split! Disappear! And give others a chance.”

I used to say I know Fela. There was a lot about him in the papers and television news in my childhood to bequeath me that sense of familiarity one has for entertainers. Yes I know him. Only I did not. “This Bitch of a Life” proved that in a thousand ways. Until you read this book, you can’t say you know the man as, perhaps, his friends and family do. It is only after you have read the book that you can really understand what he meant when he said, “I am using my music as a weapon.”