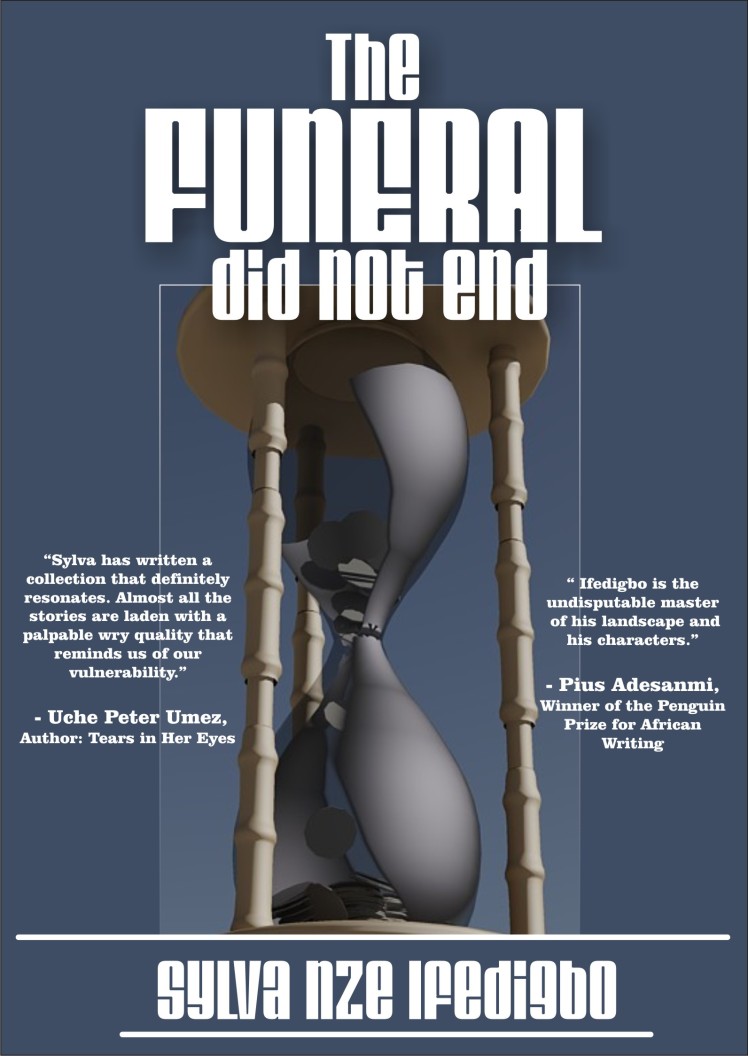 Title: The Funeral Did Not End

Stories are meant to play a role in the cultural and socio-political evolution of any society. This is the stand of many African writers, Soyinka, Achebe and Ngugi Wa Thiongo. For them, stories will lose its salt when it loses touch with the realities of its society. The Funeral Did Not End by Sylva Nze Ifedigbo is a collection of 20 fictional short stories that questions the Nigerian state, from a personal to a co-existential level of reality. The grim situation of Nigeria is like a funeral, filled with all the rites of wailing but also filled with motives-people are there, some only to take from the spoils of an unfought war of patrimony. Nigeria is a country where every group takes his or her punch on the Nigerian skin, where each group scrambles for the remnants of sentimental escapism.

The Funeral Did Not End opens with Tunji’s Proposal. Tunji’s proposal is a story that mirrors the irresponsible work ethic and the character of individuals who work in public offices. Tunji, a young unemployed graduate comes up with a grand idea of waste management for the country. He seeks the attention of the Ministry of Public works, after several visits of untold hardship and excuses of “due process”, it reaches the hand of the Senior Director, who in his powers, replicates Tunji’s idea as his own. Sikiru and other members of staff of the ministry seem to glide on with the corporate melancholia and laziness of their workplace. For them, it is unwholesomely ambitious to improve the standards of governance.  Tunji is left in the cold wondering whether he has committed an atrocity against the state for his grand idea. He, Tunji is a typical Nigerian trounced by the system amidst his relentless effort to better the conditions of state.

Sylva Nze Ifedgbo is a serious writer, an observer who is not aloof with the social realities that affect our lives, both on a personal or on a national predisposition. Lunch on Good Friday is the story of a change of roles. The mother is the bread winner and therefore operates and commands in an “Sani Abacha” style. She relinquishes her role as mother to Nkoli, the house maid, and not long after, becomes a visiting Head of State with all the garbs of braggadocio. The husband and father of the house is presently unemployed and is powerless against the oppression of her dictator-democracy.  Nze Ifedigbo tells the story from the point of view of one of the children and vividly captures the facial stratagems of disapproval in families. The story captures the psychological prognosis of modernity, of role change and our usual cosmetic approach to problem solving as a nation. In Lunch on Good Friday the mother is the Supreme Commander, who buys candies for her children in place of spending time with them, she prefers vacation to the happy noises of her children and finally displays her wealth to the Bosah’s, a foreign family, and a “foreign” husband who she prides more than her own. The story speaks of Infidelity of a different level – a psychological level.

Death of Gimbiya Street is another short story of note. We are introduced to the many extra-judicial killings by “Happy-go-lucky” policemen and the utter neglect of the duty of state to provide security for its citizens. With a mystical narrator who was murdered in the Apo Six saga, we become acquainted with the various versions of Justice on one hand, and the forgotten trials that characterise our weak, almost inexistent justice system on the other.  At the Apo Six Killings, police officers murdered some Nigerians in Abuja on June 8 2008. The matter remains unsolved, just like the murder of Bola Ige and others, and the many so called “accidental discharges” from trigger-happy security operatives. It is indeed a story that tells us how unsafe we are amidst the apparatuses of state that are meant to protect us.

Other stories that are full of imaginative ventilation are The Funeral Did Not End, which tells a tale of hypnotic or pretentious greed that cut across both cultural and religious demands. On the Hot Seat, Call Room, Share of the Money, On the line from America, the second invitation are other stories in the collection where Nze Sylva wields his skill of satire, poetic and often blunt metaphors, and picturesque language to ask a simple question of us “When will this funeral end?”

Call Room is another story of note. In it, readers become welcome to the world of doctors in the country. Vincent doesn’t want to be a doctor but his parents have forcefully predestined it for him. For Vincent, it was a hard choice between parental and societal love and his love for literature. He cannot stand the sight of blood, neither does he love the handling of his job, yet he is stuck in a profession that is believed to be more respectable and secure than others. Vincent is always in a dilemma in handling medical issues, no wonder we hear cases of doctors forgetting towels and medical utensils in people’s hearts, stomachs and intestines. This tells a lot about the country’s professional fabric, where people are wont to study for the immediate financial opportunities rather than to acquire peace of mind, respect and to contribute one’s quota in one’s profession. The corruption of the mind certainly starts from home as captured by the writer. Vincent finds a ready lap to spread his wild oats-with a fellow medical doctor who unknown to him, is also an HIV carrier. How on earth can we have doctors who don’t want to become doctors? This remains the motif of the story. It also shows the utter lack of ethics and the heightened sexual sense of individuals who have lost purpose-many of them, medical doctors.

Sylva Nze Ifedigbo also does justice in revealing the hearts of “sinators” in Share the Money, a situation where even the constitutional review process boils down to how much is being shared. Share the Money satirizes and reveals that our leaders are united in a sleaze to enriching themselves, without the common sentiments of tribe or nation. Share the Money also speaks volumes about the opposition in the country. The story carefully exposes a tactically dehydrated few who know their left from their right, but are forced to join the fray of sharing the money, since constant illegalities have passed as justice. Nze Ifedigbo crafts his characters like god, we can see the sleeping senator, the unenlightened one, the boisterous, pretentious activist, the nymphomaniac, and the various trademarks that represent the country.

Sound Proof, also dwells on politicking, this time in the academia. Prodding through the inner recesses of Professor Bako and Laraba’s mind, the intentions of a philandering powerful and irresponsible lecturer is established.  Through the characters soliloquy, the writer reflects on our skewed understanding of merit. The scandalous politicking in our academia shows that the very grain of national growth has been corrupted by opportunists who wear the toga of teachers, and who justify their monstrosity by claiming victims of their students, like Ogres in folktale, they profess one thing and practice another. Indeed, The University has a growing breed of philanderers, murderers of intellectual hopes, and pompous idiots. The Nigerian educational system has fallen to its abyss and Nze Ifedigbo spares no tale untold.

The reviewer is nevertheless critical of the book in one aspect. The collection is filled with stereotypes that are common to African and Nigerian stories. This is problematic of the need to see new perspectives in the literary scene. It is true that all is not well with us but we must begin to secure healthy outlooks, through thought and words-only the artist can help us do this- we can marshal subtle solutions instead of a glaring showcase of all that is us as a state.  We can stare at the mockery of ourselves, we can frown at the realities beset us, but we can also change reality through the prism of reevaluation. Nze Ifedigbo only observes and presents, he leaves the evaluation to his audience.

Nze Ifedigbo has spared no stone unturned in warning us of an impending implosion. With a full knowledge of history and a conscience that is lacking in the present times, Nze Ifedgbo with this collection, jerks Nigeria’s into the reality of our country.

Femi Morgan is a creative enterprise and public relations professional. He is also the curator of Artmosphere a cultural, poetry, music and arts event in Ibadan, Nigeria.